Crocodiles are a weird combination of Aussie ‘Big Thing’ and perilous prehistoric predator. Maybe our fascination with crocodiles in Australia is what makes this my most viewed post of all time*.

Or maybe it’s because of the awesome photos and superlative writing … read on, and decide for yourself 😀

But before you do, PLEASE NOTE this WARNING:

Crocodiles are VERY dangerous and can be found almost anywhere in the Top End – not just in the places I mention below, and certainly NOT just where there are warning sgns.  Large crocodiles have been found a LONG way from the sea, and in many smaller rivers and streams. SO … you MUST be crocodile aware WHEREVER you go – don’t assume it’s safe just because there’s no sign, or no one has warned you.  Assume they are EVERYWHERE in the Top End – even if you can’t see them.

Of course, the World’s Biggest Crocodile replica in Normanton, Queensland isn’t a ‘Big Thing’ ie several times larger than the real deal. It’s actually a life-size replica of the biggest crocodile ever ‘taken’ (read:  ‘shot’) by croc hunter turned croc supporter Krystina Pawloski in 1957.Now known as ‘Krys’, the 8.63 metre long (28′ 4″) monster croc is bigger than JAWS, and it’s the biggest known specimen in the world.

The blood sport of hunting crocodiles in Australia ended when crocodiles became protected in the early 1970’s. But crocodile hunting still takes place downunder – as long as your weapon of choice is a camera!

Although that won’t make any difference to the cunning saltwater crocodile (Crocodylus porosus – or ‘Saltie’) who can wait for days to ensnare its prey, and once its victim is in the ‘death roll’, there’s little chance of escape.

And just to make things more confusing, it doesn’t always hang out in salt water, either!

While less aggressive, Australia’s only other crocodile species, the Freshwater Crocodile (Crocodylus johnsoni – or ‘Freshie’) has been known to attack, although not fatally.

But hey! Who wants to be the first?!

This magnificent oasis set like a jewel amongst the stupendous scenery of the Kimberley is better known for the water birds that frequent it.

But what’s that lurking beneath its benign surface?

The video at the top of the post shows why it’s not a good idea to stray from the boardwalk.

But it’s an even worse idea to venture onto the banks of this worrisome wetland when this little beauty is sunning himself!!

Check the billabong banks on the far side regularly – crocs can appear without warning!

A known crocodile hotspot, crocodile hunter wannabees can choose an assisted croc sighting via any number of river cruises. Daintree River Wild Watch was our choice for its birdwatching credentials, but we also got to see a saltwater crocodile close up whilst on the cruise.

Our first unassisted sighting came after the cruise as we drove up the road and spotted a large saltie sunning himself on a sandbank. He wasn’t there when we passed that same sandbank on our cruise about 30 minutes before!

The Daintree River doesn’t discriminate between salties and freshies – they’re both here in abundance!

So many Daintree River crocodile cruises can’t be wrong! Sightings are virtually guaranteed on a river cruise, and are not uncommon elsewhere.

The jury’s out on whether a sighting of a Performing Crocodile (ie a croc jumping for its supper) actually counts as crocodile hunting.

It’s the saurian equivalent of shooting fish in a barrel BUT if you can’t see them any other way, then knock yourself out!!

This doesn’t really count as ‘hunting’ – but you WILL see crocodiles!!

The spectacular and otherworldly landscape of Australia’s largest lake will keep budding photographers busy for hours. One of the most magnificent spots in the country, the watery landscape is so panoramic, the wildlife takes second place.

Below the dam wall, these cold-blooded (in more ways than one) freshwater crocodiles recover from the cool night temperatures by taking in some sun. And while the morning cruise isn’t specifically about crocodile hunting, there are plenty around the banks and in the water.

Check the far bank below the dam wall. And take that 2 hour cruise – even if you don’t see a crocodile, it’s worth it just for the scenery!!

For more entertainment than is good for you, observe the anglers trying to land a big barramundi at this crocodile infested tidal river crossing into Arnhem Land. It’s also fun watching vehicles crossing the causeway as the tide comes in.

And it’s not called the East Alligator River for nothing!

Watching someone actually being taken by a crocodile would give me nightmares for a long, long time.

So watching a tinnie** full of drunken fisherman, one precariously perched on the nose of the craft as it drifted ever closer to a large crocodile they hadn’t seen, completely oblivious to the warning shouts from observers on the river bank, was a mesmerizing moment I hope never to experience again.

Luckily for them, the croc slid into the water and disappeared – they never even saw it.

As the tide came in, more crocodiles appeared downstream – not that the anglers knee-deep in water seemed to care …

But if you want your croc viewings with a bit less drama, try a Kakadu Yellow Water Cruise!!

Crocodiles abound in Kakadu National Park. See them at Cahill’s Crossing or on a cruise – but don’t make out like crocodile bait!

No, those aren’t logs in the water … Windjana Gorge, WA

Frustrated crocodile hunters who’ve dipped out*** on crocs at other hot spots will not be disappointed here, unless they’re on a lifelong losing streak. If that’s the case (and even if it isn’t), think twice about heading for Windjana unless you’re keen on experiencing clouds of red dust, brain-hammering corrugated roads, tyre-shredding rocks and other generally adverse driving conditions en route to this remote spot.

Once there, if you can tear your eyes away from the gob-smackingly awesome scenery, you’ll be reaching for the crocodile repellent – yes, there really are that many!

All freshies, of course!! But happily, that makes getting a tad closer for those souvenir photos just that little bit easier!

Back down the road in Derby, crocs are regularly seen around the mangroves, although I have no photographic evidence of the large crocodile we spotted swimming in King Sound near the jetty …

Take the track into the gorge and keep your eyes on the water and sandbanks. Some would go so far as to dub this a ‘sure thing’ sighting spot!

In the creek behind the Circle F Caravan Park campground, there’s a daily feeding session attracting any or all of the 12 freshwater crocodiles living in the creek.

They’re not always interested, but the enticement of a free snack costing virtually no energy is generally too much of a temptation to resist!

Careful observers may notice crocodiles resting on the banks of the creek – while they’re *only* freshies, my tip for the day is to let sleeping crocs lie.

But the nearby Victoria River’s self-nomination as Australia’s last great wild river may well be true, if the number of crocodile sightings is anything to go by.

The best way to see them is in a croc-proof purpose built river cruiser with a context-setting tour of Timber Creek at one end and sunset drinks and snacks on a float in the middle of the river at the other!

A Victoria River Cruise delivers on multiple crocodile sightings as well, with local Neville Fogarty identifying the ‘local’ crocs by name and reputation!

As we passed the white croc, old ‘Broken-jaw’ and the 5+ metre long Lord Lizard who disappeared without a trace into the water beneath the cruiser, Neville told us the cattle station we were passing lost 200+ cattle to crocodiles each year.

Somehow, I don’t think they’d mind a change in diet if anyone was foolish enough to stray  too close to the water …

So many sightings of both Saltwater and Freshwater crocodiles, you won’t know where to look first. But be warned – these ones are BIG!!

Disclaimer: Wild crocodiles are unpredictable, so of course I can’t guarantee you’ll see crocodiles in Australia where I have! But stay ‘croc-alert’ and you may see them where you’re least expecting it.

Like the time we watched in horrified disbelief as two crocodiles fought over a dead cow floating downstream past our campsite on the Northern Territory’s Mary River – but that’s another story!!

* OK, since you asked nicely, the 2nd most viewed post of all time is 7 Days between Adelaide and Darwin

***  ‘Dipped Out’ = Aussie expression meaning failed, or not done, or didn’t happen 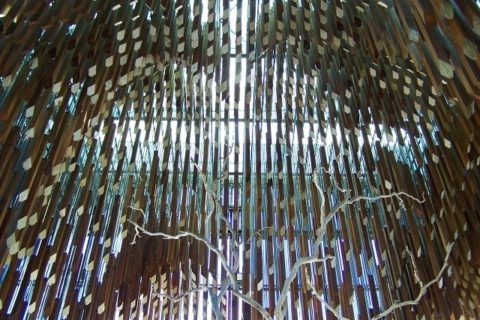 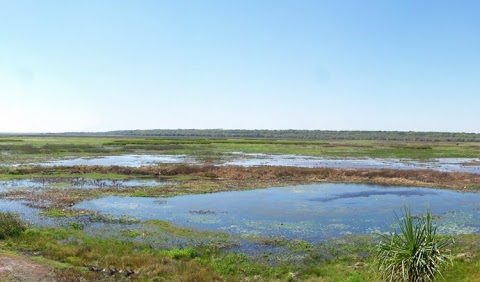