I’m a technophobic dinosaur. Losing my – gasp – film camera to economic rationalist anti-technological conspiracy* was a devastating blow from which I’m still recovering. Then after I’d cut my digital photographic technique teeth on partner Pilchard’s 2 year ‘old’ camera, he gave me a new one for Xmas! Too much too soon.
So when I was nominated by both Linda of Journey Jottingsand Jo of Zigazag Magto enter the TravelSupermarket ‘Capture the Colour’ competition, just looking at the sample photos on the competitionwebsite was enough to make me think twice!
Of course the opportunity to promote the wonders of my native land (and maybe even a little ego) won out! So I decided to make my entry stand out by taking you on a tour through several states of OZ, with photos that show its colours in a different light. AND … I enjoyed taking them, so YOU’LL enjoy looking at them, right? RIGHT????
Luckily, we won’t have to wait for long to see if Travel Supermarket ‘appreciates’ my entry, as their competition page states clearly they’ll be re-tweeting their ‘favourites’!
These photos from my travels throughout Australia were taken by my old film camera, and two different digital cameras – see if you can tell the difference!!

A predominantly BLUE sunset doesn’t get as much press as – say – a RED one!
So this sunset over Lake Pamamaroo, in the vast waterways of the man-made Menindee Lakes system in the depths of the New South Wales Outback could have easily passed unnoticed.
Attempting to move on from losing the friendly fishing competition (is there any such thing?!?!), our campsite neighbours offered us a drink before the serious business of building a campfire and cooking dinner started.
So we had ringside seats for this Bounteous Blue Bonanza – and duelling cameras!
And now, despite my eye being more naturally attuned to red sunsets, I look out for the blue. It happens more often than you’d think!
Want more? See all13 shots in the sunset sequence HERE!

Earlier this year, I added another notch to my ‘World Exclusives’ belt by climbing Mt Wycheproof, self-proclaimed ‘World’s Smallest Mountain’. The jury’s out on whether or not this minuscule mountain really IS the world’s smallest – but there’s no standard international definition of ‘mountain’ and no one officially disputing the speciousWycheproofian claim.
So that makes MY claim legitimate – for now!! But even if at some future date this prestigious accomplishment is nullified, the other Wycheproof ‘World Exclusive’ I achieved is still valid.
Because Mt Wycheproof slopes are the only place in the world that the green flowers of Correa glabra (Wycheproof form) are found!!
And as green flowers are disproportionately under-represented throughout the world, the fact of its colour is an added bonus.
Want more? Read all about my Mt Wycheproof assault HERE!

Yellow flowers aren’t really what the Yellow judge is looking for. According to the website, anyway! Too clichéd, perhaps??
Well, I know all about photographic clichés, thank you very much! And this photo is one of seven selected especially to showcase my world class cliché shot skills!!
Originally selected for the telegraph pole, selecting it again for the yellow flowers now ensures its full cliché potential has been realised.
So why did I select it?
The Queensland Outback has its own cliché: dry, hot and dusty – and often red. So what’s a field of yellow flowers doing alongside the road from Bedourie to Birdsville in the middle of absolutely freakin’ nowhere??
That’s what’s NOT a cliché!!

The crocodile cruiser swung towards the bank and our first Northern Territory Victoria River crocodile sighting was under way.

Cameras clicked.
Spontaneous laughter erupted.
Well, why wouldn’t it? Not only was this croc white, but it looked like a caricatured inflatable. Those teeth! That smile!! The way it was lying on the bank!!! We collectively applauded Neil Fogarty, Victoria River Cruise guide on finding such an innovative way to break the ice.
Then realisation collectively dawned. This croc was REAL!!
Want more? Check out 7 Croc-spotting OZ Top End Hot Spots HERE!

The absence of bodies in the water is one clue that the RED colouring this incoming tide isn’t from spilled blood. Thankfully.
But the red sand gives the game away. The sea’s distinctive blue, characteristic of Western Australia’s Broome, is coloured by the red ‘Pindan‘, also a feature of the area. The lapping of the waves releases the colour. And with tides amongst the highest in the Southern Hemisphere at up to 9 metres, the mangroves are often completely submerged at high tide so remain unstained.
It would never have occurred to me to combine the blue of the sea and the green of the mangroves with red – it’s a startling contrast that’s even better live!
Even if it does seem a little macabre …
Want more? Well, sign up for blog updates – there’s plenty more Amazing Australian Adventures to come!!

* It would be too expensive to fix – if I could find a technician willing to sully her/his hands on such ‘old’ technology. And that’s ALMOST a quote! 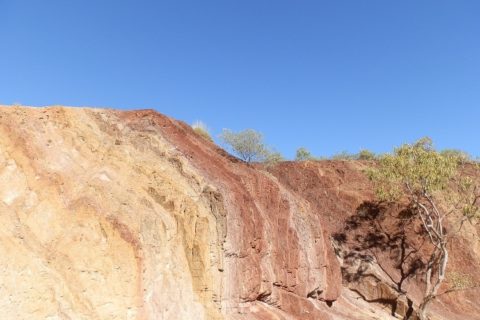 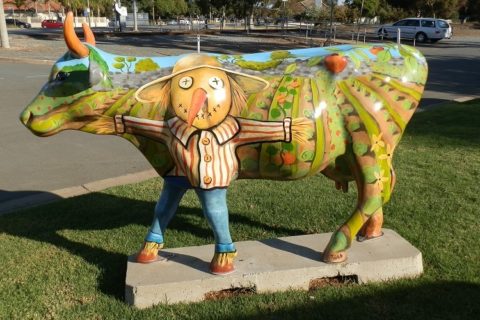 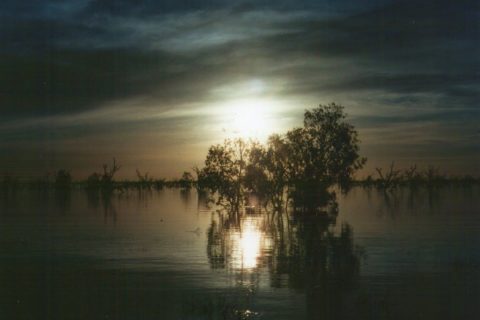