For a good time, spend a few nights at Central Australia’s Ormiston Gorge and surrounds.  On our stay, we managed 6 fun-filled days (and nights)!  Here’s how!

135 km west of Alice Springs, Ormiston Gorge’s 300 metre (985 feet) walls tower above Ormiston Creek. The doubled-over double layer of quartzite folded into itself has made the gorge’s walls significantly higher than those of the other gorges in the region. Its location in the surrounding ranges means superb panoramas, wonderful walks and a marvellous base from which to experience the region.

Here’s my guide to 7 FAAABULOUS experiences to have within a 10km radius of Ormiston Gorge!

‘Oh, you’ve missed the sunrise,’ she said, smirking with a particularly smug condescension. It almost – but not quite – masked the unfortunate inanity of her claim.

Wouldn’t I have noticed if I’d been climbing the steep, narrow and rocky track to the lookout in the total darkness of the pre-dawn night?

No, the sun-drenched landscape was a dead give-away. I clearly HADN’T missed the sunrise!

I’d just experienced it in a different spot.

Secure in the superiority that one-upmanship brings to the uninformed, the couple descended into the chill of the Gorge.  They were hung about with the several thousand dollars worth of photography paraphernalia that would prove their sunrise claims and show off their ‘serious traveller’ credentials.

Unused to such mindless competitiveness before breakfast, I got out my trusty single lens/single SD card/single battery/no tripod camera.

Even though the sun had ALREADY RISEN, the fine view from Ghost Gum Lookout above the towering walls of Ormiston Gorge was just begging for some amateurish clichéd landscape shots …

As the ALREADY RISEN sun continued to ascend, the chill of the cold Central Australian desert night wore off. I wondered if the Camp Bore had left yet. The previous night, he’d set everyone straight about a number of diverse topics at the communal Barbecue area.  Then he’d inadvertently ‘entertained’ everyone in the campground with a DVD on ‘Super-loud’ setting presumably to counteract his deafness. And early this morning, he’d treated a fellow camper, foolish enough to admit to not having heard the dingos the previous night with a howling dingo impersonation.

Then way down in the gorge beneath us, I sensed a movement. After the Camp Bore’s strangled yodelling it was quite a surprise to see the dingo moving so quietly and surely along the water’s edge.

No, really. Every year as the waterhole dries out, more and more fish compete for less and less oxygen in the shrinking pools. Then along comes a dingo in search of some easy pickings and scoops them out!

We may have ‘missed the sunrise’.

But in a superb combination of poetic justice AND childish satisfaction (that gave my inner child an unkind shiver of glee) WE saw the dingo.

This extraordinary 7 km loop trail passes through a cross-section of Ormiston Gorge’s scenic highlights.  Then there’s the possibility of swimming or wading through the ice-cold water of Ormiston Creek towards the end of the trail.  That’s just part of the fun.

But don’t let this – or anything else – stop you from attempting this 3-4 hour hike. In my opinion, even though we didn’t spot the Spinifex Pigeon family that EVERYONE ELSE saw, it’s one of the best medium length walks in the country!

If this teaser pic isn’t enough, click HERE to see what happened when WE did the walk!

The Ormiston Gorge and Pound walk is a mere detour on the 223 kilometre/12 section hike through the West MacDonnell ranges that forms the demanding Larapinta Trail. Difficult terrain, extreme weather and a remote location mean it’s not for the faint-hearted – or under-prepared.

But lack of training, portable camping equipment or energy needn’t prevent a ‘Larapinta Lite’ experience! Part of an official section of the trail connects Ormiston Gorge with Glen Helen Gorge, a few kilometres away by road.  It’s quite probably one of the easier sections of the trail to attempt.

We ventured a few kilometres down this section of the track.  Past staggering views of Mt Sonder and the Pound we finally reached a lookout point with the stunning red cliffs of Glen Helen gorge in the distance. After a fruitless search for Rufous Crowned Emu Wren, we returned the way we’d come vowing that next time we’d organise a pick up at Glen Helen Resort and walk all the way.

BUT … far more importantly, now I can add the Larapinta Trail to the list of major walks I’ve ‘attempted’!

The region is so crowded with spectacular gorges, travellers wishing to avoid the risk of becoming ‘all gorged out’ are often tempted to bypass a couple of them!

But skipping Glen Helen Gorge would be a mistake.

Not just because of the spectacular Gorge itself, either. The Glen Helen Resort offers meals and accommodation, along with tours, helicopter flights, fuel and gas. As well as a well stocked bar.

And you can’t have too much RED Rock, right?? There’s more about Glen Helen Gorge HERE!

Mt Sonder isn’t the Northern Territory’s highest mountain – that honour goes to Mt Zeil – but it’s (arguably) the most picturesque!

And as a real Larapinta trekker told us after climbing the mountain on the previous day’s hike – ‘it’s a better view OF than FROM’!

There’s something about its Namatjira-esque blue folds that draws one towards it.  But we (fairly easily) resisted the impulse to climb it and instead opted for the Mt Sonder Lookout a short distance west of Glen Helen.

It’s a fine view in its own right.  And there’s an added bonus because you’re looking across the ancient bed of what is known as the world’s oldest river – the Finke.

The collection of campers at the Ormiston Gorge campground during our 6-night stay would have defied any B-grade movie casting director to create a better ensemble.

So much so that hanging out at camp was as entertaining as anything else the gorge had to offer.

I guess you know you’re getting older when listening to the young couple 6 months into a year travelling Australia gives you a whole new perspective on young-love-speak. Sure, the “’Hi Baby’/’Hey sweetie!’” combo wasn’t that unfamiliar – but after spending only 5 minutes apart??

Then the dialogue as they prepared to leave.

‘Hey sweetie, have you packed the bedding?’ ‘Sure, babe.’ ‘There just seems more room than usual.’ ‘Well, maybe I just folded them differently.’ ‘You must have packed them in a particularly awesome kinda way!’ ‘Yeah sweetie.’ ‘So do you fold them up, honey?’ ‘No, I just throw them in, babe.’ ‘I’m flabbergasted!’ ‘Hey, why don’t we make X’s favourite meal when we catch up?’ ‘Babe, that’s a GOLDEN idea!’ Education and entertainment all in one, we were sorry to see them go.

But replacing them was Broken Hill artist, Eric McCormick whose vibrant works beautifully capture the magic of the desert. Eric took our breath away with a catalogue of his works inspired by a visit to Spain’s Rio Tinto. We also enjoyed several entertaining chats over the communal barbecue.

The aforementioned Camp Bore spoke so loudly we all knew that he and his longsuffering wife had spent the best part of 5 years on the road. At the rate of one new campsite every few nights, I wondered how many people he’d potentially annoyed and irritated during that time.

Then there was the couple with such a faulty sense of direction that when trying to find the Gorge and Pound walk they’d ended up somewhere else altogether. We tried to explain how to access the Larapinta segment we’d done, but they couldn’t find it. I wonder whether they even knew they were at Ormiston Gorge?

With hot showers and free barbecues, the $10 per night per person rate seemed quite reasonable for a site within cooee of the gorge and all its attractions. But the camp hosts still spent a good part of their day in a losing battle to keep the freeloaders from hogging the amenities the rest of us had paid for. In a vain attempt to keep the solar-heated hot water for those who’d paid for it, the showers were locked from 10am – 4pm each day.

Except on the hosts’ day off when the amenities were left open all day. Word gets around – a steady stream of campervans and clapped out old cars headed in, showers apparently ran hot all day and the water was well and truly cold by the time we returned from our daily adventures.

Is it something in the air? Or water? Or does this strange and magical place attract the quirky, off-beat and downright bizarre?

And if so, what does that make US?

The Ghost Gum Lookout is part of a longer loop walk along the Gorge’s western wall.  The trail descends into the gorge and returns by rock-hopping along the creek bed. Whether or not you attempt the whole loop, it’s well worth reaching the lookout in the very late afternoon.

Because looking across the gorge from the lookout is very different to the sunrise ALREADY RISEN SUN view as the setting sun lights up the Eastern wall.

But … far down the gorge and deep in the silence of sunset, the dingo lurked again! 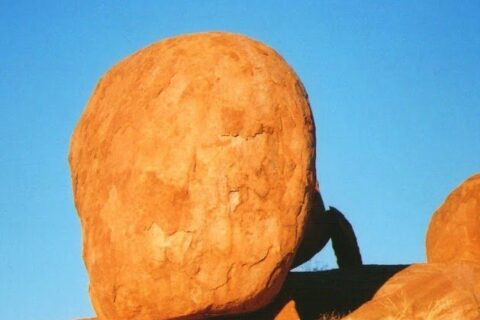 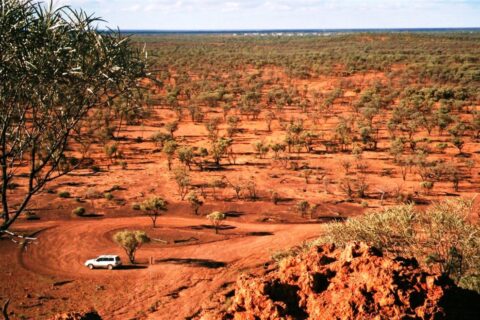 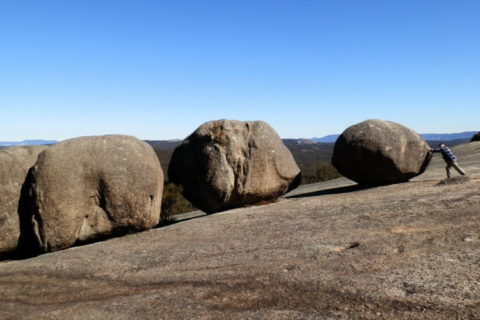