Sand dunes and shipwrecks.  A wild and windswept heli-pad. Magnificent cliffs, an old wooden railway transport line and exotic lighthouses. Historic ruins and a sailor a long way from home.  None of these are visible from the entrance to Innes National Park.

And you can’t see them from the ~30 km of road winding through the park.

To discover the history, see the sights and uncover the mysteries you’ve got to go behind the scenes and take one or more of the 7 sensational walks in Innes National Park.

Although the superb view from almost any vantage point along that road is SO distracting you’ll be tempted to keep driving from lookout to lookout, take the walks for an even better chance of scenic overload!

AND as well as the attractions above, there’s wildlife, spring wildflowers, history and some of South Australia’s most spectacular coastal scenery – including Public Loos so scenic some of them are in MY BOOK!

On a fine day the view over the Stenhouse Bay jetty takes some beating in the scenic stakes. That’s why it’s usually our first stopping off point after entering the park a few kilometres south-west of Marion Bay.

From the park entrance it’s only a short drive to the jetty – and the town that the Waratah Gypsum Company built in 1900, although there’s not much of it left.

It’s also the trailhead for the Lookout Walk – a 2 km circuit that shows off what IS left and the track passes rusting machinery; interpretive signs explaining the bay’s historic significance; and 9 lookouts showcasing the spectacular views to the islands in Investigator Strait and the Rhino’s Head (see above)!

Which has to be one of Australia’s most OBVIOUS place names!

But the most memorable thing for me on this walk isn’t the scenery, wildflowers or wildlife. It’s the grave of a sailor buried in this lonely outpost far from home.

This is the shortest of the walks in Innes National Park.

The track from the car park to the lighthouse on the Cape runs along a ridgetop with massive cliffs on one side and exposed slopes running down to the pounding seas below on the other. I didn’t need the signs warning walkers not to go too close to the edge – it’s a sheer drop off way Way WAY down to the water.

No photo is worth taking the fall!! Does that mean I’m not a REAL photographer??

Directly across the strait from the lighthouse are the Althorp Islands, site of several shipwrecks and another lighthouse – a stunning two-lighthouse view! And with a coastline THIS rugged in all directions, the lighthouse/shipwreck thing starts to make sense.

If you’ve already walked the previous two trails, the historic township of Inneston (you’ll NEVER guess the name of the bloke who founded it was William Innes!), provides a welcome break from the relentlessly staggering coastal scenery.

Although it’s got it’s own attractions …

Tragically, while the town that once supported the budding gypsum mining industry was at one stage big enough to support its own bakery, neither are operational today. But the walking track shows off the town’s highlights, including restored buildings, Inneston Lake, spectacular spring wildflowers – the freesias are particularly fabulous – and wildlife such as emus, malleefowl and kangaroos.

You’ve probably realised by now you won’t be able to complete all these walks in one day. So if you’re looking for a cool place to stay, try Inneston’s heritage accommodation – if you can live without TV or mobile access, that is!

Once upon a time, the walk from the trailhead at Inneston – an extension of the historic trail (above) – meant getting to Rhino’s Tavern at Stenhouse Bay 3.8 km away in time for lunch before returning along this old wooden railway line that once connected the two towns.

Sadly, the tavern has now closed so carry enough food, water and supplies for a 7.6 km return trek. But it’s an easy walk through the trees and along the embankment upon which the railway line was built, with fragments of the gypsum cargo lying among the leaf litter – and spring orchids – where they fell many years ago.

Not much of the railway track remains today, but there’s a sense of the past that lingers along the line where horses once drew heavy loads of gypsum from the mining sites to the Stenhouse Bay jetty.

Other than glimpses of the sea near Inneston and Stenhouse Bay, this walk is another opportunity to escape the superb coastal scenery – if you need to!!

If you were still wondering about the lighthouse/shipwreck thing first encountered at Cape Spencer, West Cape will leave you in no doubt.

The stretch of (almost) deserted beach stretching out below the long, wooden stairway down to the sand many metres below is an impressive sight. But the view’s even better from the top of the Cape, where a trail to the lighthouse goes just a little closer to the cliffs than I’m comfortable with, especially when the wind is strong!

Hold on to your children – unless they happen to be particularly noisy, naughty or nasty – it’s sometimes hard to stay fully upright when the wind’s up. There probably won’t be many days when a helicopter could land on the heli-pad next to the unusual lighthouse atop this windswept spot (see first photo above), but it’s nice to know it’s sometimes possible.

But the sight (and site!) of one of Australia’s most scenic public loos, with beach views in one direction and the scenic splendour of Pondalowie Bay in the other make braving the wind worthwhile.

If trails along the top of high cliffs with no barriers between you and the sea a LONG way below make you nervous, then the Royston Head walk isn’t likely to make you feel any better. But swallow that fear, if you can – this is one of the most spectacular spots in the park.

In my humble opinion.

The walk winds up from Dolphin Beach through the dunes before reaching the exposed cliff tops of the Head – an interesting range of habitats, vegetation and wildlife that you’ll promptly forget when faced with the awesome view at the end of the hike!

That’s why this is one of my favourite walks in Innes National Park!

Although it’s part of Innes National Park, Gym Beach isn’t accessible via the main road through the park. The alternate route from Marion Bay gives access – but then there’s no direct road access to the rest of the park without returning to Marion Bay.

Luckily, the hike starting near Browns Beach along the back of the dunes is an introduction to the varied coastal vegetation habitats as well as providing access to Gym Beach. Although it’s a LONG way to go for a swim!

Strangely enough, the walk can be done without laying eyes on either beach – although doing that would deprive you of two of South Australia’s BEST beaches!

Walks in Innes National Park are suitable for most people – and if I can do them all, then so can you! Enjoy!!

WHERE: Innes National Park is at the south-western tip of the Yorke Peninsula, and is around 300 km south-west of Adelaide

WHEN: All year round

COST: Park entry fees ($10 per car/$8 concession as at April 2015) and Camping fees apply, and must be pre-booked and paid online HERE

STAY: The park has several camping areas. Heritage Accommodation is also available at Inneston. Nearby Marion Bay has a range of accommodation, including a caravan park.  Other Yorke Peninsula Towns also offer accommodation. 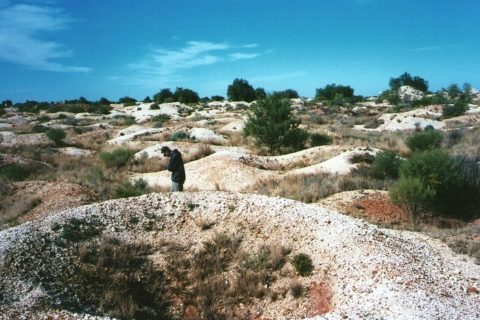