It’s possible my definition of ‘cool’ isn’t the same as yours. I think it’s quite easy to find something cool downunder – anything new, intriguing, scenic or exclusive to OZ (or the world) does it for me.

So if you’re wondering about some of the inclusions in this selection of 12 cool things I saw for the first time in my travels through five Aussie states in 2014, that’s why they’re there!

If you don’t agree, why not tell me ALL about it in the comments 😀

This little island off the eastern coast of Tasmania is about the same size as Singapore. But whereas Singapore has a population of 6,000,000+, Bruny Island is a LOT less crowded with only around 600! Stunning scenery, including the 2nd highest cliffs in the Southern Hemisphere and one of Australia’s most scenic public loos; wonderful wildlife – think seals and Tasmanian endemic birds – AND fabulous food means a day trip isn’t nearly long enough to see everything.

And I’ve never been on a waterway with a name as cool as the D’Entrecasteaux Channel!

We got to see Tasmania’s most famous mountain on a ‘normal’ day. And that meant cloud, fog, mist, drizzle, rain, wind and the coldest temperatures we’d experienced in Tasmania to date! Apparently, those typical images of Cradle Mountain’s classic shape reflected beautifully in Dove Lake below (click HERE to see what I mean!) only happen on one or two days in every ten!

SO … I guess we were lucky. Because MY shots show the real thing in all its non-clichéd glory! Right??

I’ve seen wombats before. I’ve even been bitten by a wombat!! But 2014 was the year I first saw Vombatus ursinus tasmaniensis, which the informed will instantly recognise as the Tasmanian Wombat – a sub-species of the common wombat. The lesser informed might think it a visitor from another planet with its odd shape, shambling gait and its legendary ability to burrow underground in the most inhospitable places.

Most Australian women know a ‘wombat’ – the name’s often given to a bloke who, like the wombat, eats roots and leaves. I don’t know if the Tasmanian wombat shares these habits with its mainland counterparts. But … I’ll bet a few Tassie blokes do!

It’s not that easy to see the world’s highest volcanic rock stack up close. First, get to Sydney. Then take a ~600 km flight to Lord Howe Island which, depending on the crosswinds on the airstrip bisecting the island, may or may not be able to land. Then wait for suitable weather conditions for the 23 km boat trip across the open ocean to the Pyramid – there’s a 50% cancellation rate. 66.66% if you’re as unlucky as we were with a FAIL on our first two attempts!

But finally the planets aligned and we gazed in awe at Balls Pyramid’s distinctive twin spires towering 551 metres above us.

And in an uncharacteristically speechless moment, I ran out of superlatives!

After rats invaded Lord Howe Island following a shipwreck back in the dim, distant past, the endemic Lord Howe Island Phasmid – a large stick insect – was thought to be extinct. But many years later, it was re-discovered on the inhospitable and rugged Balls Pyramid (see above!) by a scientific expedition.

Luckily, we didn’t have to climb or camp on Balls Pyramid to see this rare creature for ourselves – there are a couple in the Lord Howe Island Visitor Information Centre.

And call me shallow, but seeing something that’s been brought back from extinction AND that not many others have ever seen gives me a BIG thrill!

Seeing my name on my first book – Aussie Loos with Views! – was one thing. But seeing myself on TV was quite another! My first (and possibly ONLY) TV appearance to promote my book on Weekend Sunrise may or may not fit YOUR definition of ‘cool’.

I’ll leave you to judge it for yourself!

To watch the video: Hover the cursor over the bottom of the picture. Click on the Forward Arrow symbol that will appear in the bottom left hand corner. There’s about 15 seconds of ‘sponsor messages’ before the interview starts.

*IF you received this post by email, click on the link to the blog post at the top of the email – you won’t be able to watch the video from the email.

MORE about Aussie Loos with Views!

I’m SO not a morning person that it wouldn’t be far wrong to say that seeing ANY sunrise ANYWHERE was a first for me. But the sunsets were so spectacular near our campsite on our first visit to Lake Moogerah that I braved the cold and dark to see what I’d normally be missing.

So what’s a few bleary eyes and frozen fingers when sunrises in the superb Scenic Rim region look like THIS?

MORE about the Scenic Rim

We took a day trip from Woodenbong along the notorious Mt Lindesay Road (arguably Australia’s worst) to Queen Mary Falls in the Main Range National Park. From there, the road winds upwards for 7 km to a vantage point 1005 metres above sea level overlooking the spectacular scenery of Condamine Gorge.

Who even knew there WAS a Condamine Gorge? An embarrassing admission given it’s strategic importance as the headwaters of the Murray/Darling river system that reaches the sea in my home state, South Australia.

We decided to forego the pleasures of the 4WD Gorge track and its 14 river crossings in favour of morning tea at the Spring Creek Mountain Cafe. All in the interests of seeing more of that stunning view, of course!

9. The Roxy Theatre and Café

A fully restored – and fully functioning – Art Deco cinema complete with café and a musuem dedicated to its Greek heritage was an unexpected bonus in small-ish New South Wales country town Bingara. And when we decided to stay for a few days and explore the area, we lucked out.

Dinner at the Café, a look through the museum and an excellent show from Song and Dance Man Mike McClellan showcased the Roxy’s awesome attributes superbly.

But next time I’ll take a tripod for some blur-free interior shots!

MORE about the Roxy Theatre, Bingara

The 50 km drive over a bone-jarring, dusty, rocky station track heading due north from tiny Riverland settlement Taylorville to Gluepot Reserve took over an hour and a half. But deep in the South Australian mallee surrounded by sand dunes and spinifex, we entered a world of walks, wildflowers and wildlife.

Who cared that we didn’t see any of the 5 ‘lifers’ that birdo Pilchard hoped to find on this once- pastoral property, when a walk in the early morning light showed the beauty of this harsh, arid landscape? And it didn’t matter that our camp shower malfunctioned in the middle of our stay when the flowering eremophilas were so abundantly spectacular. Even the thought of facing that long, rugged drive on the way home wasn’t enough to faze us. Why would it?

This is Outback Australia at its BEST!

A whole lot of large white birds resting on a rocky knoll a few kilometres from Victorian coastal town Portland was interesting – but you’re probably thinking it’s not THAT exciting. Every now and then a few of them would take off, swooping, soaring and generally showing off against a bright blue sky in a completely non-photo-friendly way.

But this cacophony (or whatever the correct collective noun is) of Cape Gannets on Point Danger (cool name, huh?!) is the only mainland Gannet colony in Australia – a spillover from the rugged Lawrence Rocks colony, just two kilometres offshore.

It’s rare to see so many gannets up this close without being out at sea. And the stretches of staggering scenery along this part of the coast are an added bonus – especially if you’re a non-birdo!!

You can’t see the wild and rugged scenery of the Coorong – Australia’s longest beach – from many places on the long drive along the Princes Highway that parallels the coastline en route to Adelaide. The 194 km (120+ miles) of sand, unbroken except for a collection of three random boulders 15 km north of of Kingston South East. So as we returned home from another Australian exclusive – a sighting of the first Long-billed Dowitcher ever recorded downunder – we took the short detour to see them.

Apart from sand dunes and waves stretching out to the horizon and a 4WD that just WOULD NOT GET OUT OF MY PHOTO, there’s nothing much else along this vast and empty beach on the edge of the Great Southern Ocean.

Except for the view. AND these three random granite boulders.

Now … see if you can guess why they called this area ‘The Granites’!!!!

MORE about the Coorong

So that’s 12 of the cool new Aussie things I saw and experienced in 2014.  2015 has already been exciting with a week in a retirement village, a narrow escape from a bushfire and the threat of floods! 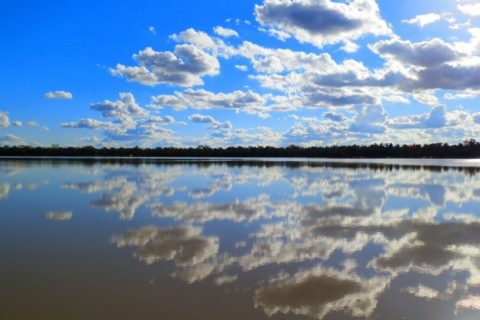 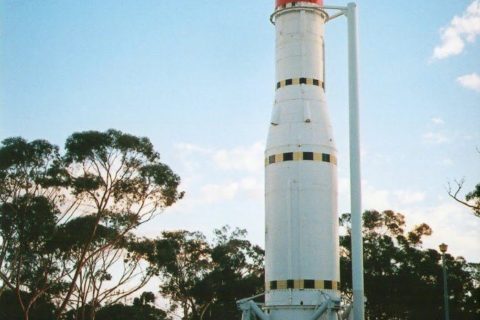 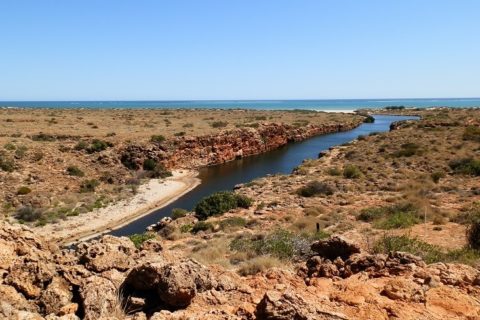