‘The current’s running like a cut cat round the island,’ Jack shouted. He fired up Noctiluca‘s powerful 200 horse power engines and guided the eight-metre vessel into the bay.

If not for the camera in one hand and a convenient strut for balance in another, I’d have high-fived Pilchard. On our first trip three years ago, our tour had been cancelled due to bad weather. Two days ago, bad weather struck again.

But the third time was the charm, and we were finally en route to Balls Pyramid.  At 552 metres (1811 feet) in altitude it’s the highest volcanic rock stack in the WORLD!

It was going to be a bumpy ride.

That’s because the 23 km (14.2 miles) trip to the distinctive hunk of rock that is Balls Pyramid crosses a deep water trench. But the rare combination of open ocean and land makes the Pyramid a unique crossover habitat.  And that made it perfect for bird-watching and diving!

But first we had to get round the island.

As we rounded the northern cape with sheer cliffs plunging into the tossing seas, my psychic powers told me we’d entered the less protected waters. That and the wild westerly wind, rough, choppy seas. And the current which was indeed running like a cut cat as we headed for the islands.

Lurching and heaving in the boiling blue waters swirling round the rocks, we edged closer and closer to the cliffs.  We spotted a cloud of Grey Ternlets,birding lifer #1 for the trip, with five more to come before the tour was over. As all cameras except mine clicked wildly around me, I was in serious danger of being knocked overboard by thousands of dollars worth of giant lenses swinging wildly in the heaving waters.

What a way to go!

But as the spray rained down on all that expensive camera equipment, I caught my first sea-level glimpse of Balls Pyramid, visible from only a few places on Lord Howe Island.

Tour guide and skipper Jack Shick, a 5th generation Lord-Howe-Islander and co-owner of Sea to Summit Expeditions, has all the island’s bases covered. When he’s not running fishing charters and Balls Pyramid tours, he’s guiding climbers up the 875 metre (2871 feet) high Mt Gower. Round the more rugged, eastern side of the island the view of the long, exposed ridge, last leg of the strenuous14 km hike that led to its summit gave me the cold shivers. Jack’s climb with his father at 8 years of age was the first of 1700+, the most ascents made by anyone ever.

All that despite being around my age!

Bird Life on the Open Sea

I resolutely put the thousands of metres of water between me and the bottom of the trench out of my mind as we entered the open sea. I braced myself against the side of the boat and tried desperately to keep the horizon level for yet another shot of Balls Pyramid.

We’d entered the ocean-going bird zone and the Flesh-footed Shearwaters wheeled and dived in a feeding frenzy. Can you guess why they’re also called ‘Muttonbirds’?  A flock of White Bellied Storm Petrels, world’s smallest seabird, fluttered around us their long, trailing legs looking like they were dancing on the waves. And a lone South Polar Skua on a rare excursion this far north cast a giant shadow on the deck as all cameras but mine clicked furiously.

Balls Pyramid is impressive from wherever you view it.

But nothing had prepared me for the reality of the Pyramid with its massive, bare basalt peaks rising straight up out of the ocean, the intriguingly coloured rock towering high above our tiny boat.

Wild, wet and windswept, the heavy seas crashed around the rocky reefs at the Pyramid’s inhospitable 1100 x 400 metre base as Masked Boobies soared around the peaks.

The first successful ascent was by Bryden Allen and party in 1965.  This followed an unsuccessful attempt the year before by a party including legendary explorer and entrepreneur Dick Smith.  In 1979, Dick Smith returned to the pyramid. With fellow climber John Worrall completed the ascent where he then claimed Balls Pyramid for Australia!

Me? AAAAARRRRGGGGH! Not ever, no way!

Inhospitable though the Pyramid may be, a remnant population of the endemic Lord Howe Island Phasmid was discovered here many years after it had been given up as extinct on the island. It’s the only known colony in the world.

As we chugged around the Pyramid, I was awestruck by the ever-changing vistas of its stupendous bulk. Colours and patterns swirled through its jagged peaks and sheer cliff faces, with massive cracks criss-crossing the rocky layers and perpendicular walls. I finally started snapping away.  Pilchard was horrified when he realised I hadn’t been quite as busy snapping the wondrous array of birds he’d never seen before.

And would possibly never see again.

Tragically, a reduction in photographic activity wasn’t the only clue as to who wasn’t a very good sailor as we slapped through the swell, spray swirling in all directions. Bracing myself against the side of the boat and Pilchard, I snapped the retreating Pyramid in its ever-changing guises as the rain moved in from the west.

Rounding Lord Howe Island’s southern end, the monstrous bulk of Mt Gower soared above us. Providence Petrels whirled and spun against the cliffs in the world’s only known breeding grounds as Balls Pyramid disappeared from view.

The extreme upper body workout I’d had from hanging onto the Noctiluca railings to stay upright in the heaving seas and monstrous swell had been tiring.  But I furiously pedalled my bicycle homeward against the wind, in a successful attempt to outrun the rain. Happily, we’d had the foresight to lay in supplies.  As the night closed in and turned to rain and I collapsed, exhausted, onto the lounge.

But unlike skipper Jack, I hadn’t climbed Mt Gower the day before. I still had a LONG way to go! 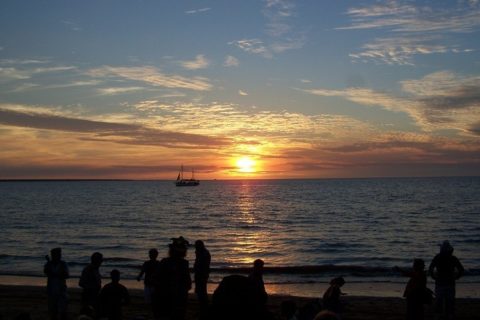