As Aussie road trips go, the Lions Road NSW isn’t the best known. Or the longest. Or even the most demanding! But this 50 km fully sealed stretch of road linking the Mt Lindesay Highway near Queensland town Beaudesert with the Summerland Way near New South Wales town Kyogle is one of the most scenic, unusual and intriguing stretches of road in Australia.

According to me, anyway.

Once travelling north from Kyogle, NSW to Rathdowney, Queensland; then later that same day back south to Kyogle. The drive itself doesn’t take long if you’re just trying to get from A to B.

But as a self-drive tour, the Lions Road NSW with its eclectic mix of natural attractions, fascinating history and unusual points of interest is as good a day out as you’ll find almost anywhere!

Here are my TOP 7 reasons why!

If you want something done, it’s sometimes quicker to just do it yourself!

After government funding for a road roughly following the interstate railway line through the McPherson ranges fell through in the mid-late 1960s, the Kyogle and Beaudesert Lions clubs joined forces to build a gravel road themselves.

Since its official opening in 1973, the communities raise funds for

maintenance and improvements via a donation box at the Queensland/New South Wales Border, and visitors to the area have the option of a shorter, scenic and more direct route south.

The construction history in the area goes back even further to the railway line – a project employing over 1500 people over four years – with one of Australia’s most historically significant railway engineering feats in Australia, the Spiral Loop.

To the casual observer, the photo (below) shows a fairly standard landscape featuring a not-unattractive well-forested hill with an jagged-edged mountain range in the background.

But lurking beneath the contours, pixellations and wooded slopes is one of Australia’s most intriguing feats of railway engineering. To reduce the length of the Main Range tunnel a few kilometres north, trains gain (or lose) 20 metres of altitude by passing through the mountain below the lookout twice, completing a loop. Naturally, given our national penchant for clear naming conventions, the whole structure is known as the ‘Spiral Loop’!

According to the Kyogle Council Visitor Information Guide, Neville Bonner (first Indigenous politician) was the first person to travel from QLD to NSW through the main tunnel. When he was a child, his stepfather worked on the line, and Neville was passed through the hole when the tunnel broke through!

Tragically, the daily passenger train from Brisbane generally passes through the loop and tunnel VERY early in the morning. So rather than risk a dark, frosty drive during our mid-winter stay in Kyogle, we planned a Sunday drive to catch the mid-morning goods train – which we would have done if not for a FLAT TYRE! So I leave you with this photo (above) of a passenger train passing the Kyogle Caravan Park instead!

Just as well a visit to the lookout is interesting in its own right, right?!?! Here’s a list of other things to do there (in no particular order):

a) Admire the Scenic Public Toilet!

b) Watch the birds (feathered)

It’s an insight into the difficulties in constructing a railways roads through thick, tick-infested scrub over rugged and mountainous terrain!

At the junction of the High and Low roads, a few kilometres north of ‘The Risk’ – the locality off the Summerland way where the Lions Road NSW starts just 19 km north-west of Kyogle – the Viaduct towers above Gradys Creek. From here, the Low road follows the railway line more closely before re-joining the High Road a few kilometres north.

But for me, the Viaduct is just another compelling reason (along with the Spiral Loop) to make the trip across the ranges by train one day!

There are a few good reasons to stop at the border. Here they are, in no particular order:

a) Make a donation. All funds raised from the donation box go to the Kyogle and Beaudesert Councils for maintenance and improvements of the road.

b) Check your rig for runaway rabbits! Because bringing a rabbit across the border into Queensland (that’s what EVERYONE wants to do, right?) will attract a fine of up to $44000.

c) Admire the scenery (see 1st photo above). It’s REALLY worth it! Especially the view looking from the New South Wales side down the range – and extraordinarily steep road – into Queensland.

d) Take a photo or two, or two hundred. And be grateful I haven’t uploaded ALL the photos I managed to take in the few minutes we stopped at the border gate to Facebook.  There’s plenty – read: ‘more than enough’ – here, right?!

Across the border, down the road and round the corner – actually, make that LOTS of corners and many crossings of Running Creek – the Andrew Drynan Park with its picnic area and campground is a great place to stop and admire the superb scenery.

And a scenic amenities block is one of the BEST reasons to stop! Or is that just me?!

A turn-off to the left just before the Lions Road meets the Mt Lindesay Highway at Innisplain ends at Rathdowney, where we turned around for the return leg of our Lions Road NSW odyssey.

Gateway to the magnificent ranges of the Scenic Rim, including Mt Lindesay and Mt Barney, the small town of Rathdowney is a great base to explore the Rim’s eastern reaches.

But that’s another story!!

Name: Named for the Lions Clubs, not Mt Lion, part-way along the road

Start: The Risk, 19 km north-west of Kyogle on the Summerland Way

Restrictions:  Please NOTE that some vehicle height and weight restrictions may apply.  Please check before taking this route if you are towing, or if your vehicle is high.

Scenic Public Toilets: Two, one at the Border Loop Lookout; and the other at Andrew Drynan Park 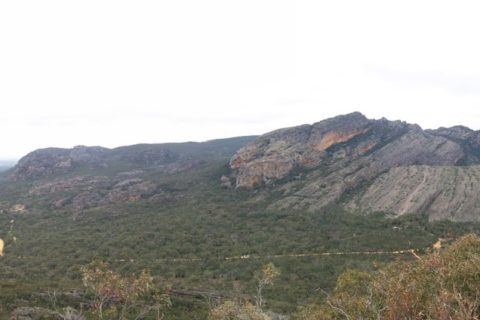