It took an awfully LOOOOOONG time to climb Mount Abrupt.

It took a long time to even get there. Over 20 years of regular trips to the Grampians National Park and its amazing natural attractions had passed by before we fully explored its wilder, more remote southern end. We’d always found plenty to do from Halls Gap, in the Central Grampians 65 km north.  The southern stronghold of Dunkeld (~280 km west of Melbourne) was just a little bit far for a day trip that included a lengthy hike.

Or so we’d kept telling ourselves.

The sheer, rocky cliffs visible from the road make Mount Abrupt look scarily unassailable – at least to a casual (read: unfit!) climber like me. But I’d always found the dramatic shapes of Mount Abrupt and Mt Sturgeon strangely fascinating. Or Mud-Dadjug and Wurgarri, if you want to get back to basics.

But finally, we were staying at the excellent Dunkeld caravan park.  From there we could see the distinctive peaks marking the end (or is it the beginning?) of the magnificent Grampians mountain range looming over the town.

And then there’s the length of the Mount Abrupt hike!

It’s a relentless climb (note to self: yes, this IS what mountaineering means).  It rises steeply over the 3.25 kilometres (one way) to the 827m summit, so it isn’t for the faint-hearted. Thankfully, it doesn’t take much of the 460 metre elevation before the views are worth stopping for. And if you need more ‘photo breaks’ to admire the staggering scenery, follow my lead and make the climb in spring. That way you can make it your mission to photograph each of the many wildflower varieties you’ll encounter along the way!

But be warned – adopting this strategy will probably double the 2-3 hours you’re advised to set aside to complete the climb!!

My other no-fail tip for increasing rest break frequency is, of course, to climb with a twitcher (read: bird watcher!). That way you’ll score extra (read: legitimate) breaks whenever a bird squawks, moves, flutters, flies, scuttles, twitters or just breathes.  That’s because the twitcher will ALWAYS stop to check it out!

And if you need a rest stop, just stop and say the magic words: ‘is that a bird over there in the scrub?’  Trust me!  This REALLY works!!

The town of Dunkeld is worth a stay even if you don’t want to climb Mount Abrupt. It makes a great base – and holiday destination – from which to explore Southern Grampians attractions.  These include the Victoria Valley, Mount Sturgeon and the Piccaninny; and further south to the Kanawinka Geotrail and Great Ocean Road.

I swear my judgement hasn’t been impaired by the town’s excellent selection of baked goods and other eats!

Our morning had started with a walk to the nearby Arboretum and Lake.  The superb views of Mount Abrupt’s sheer rocky cliffs (see top photo) left me wondering whether climbing it was such a good idea. The trailhead, a few kilometres north, is an easy drive. The walk starts with a gentle climb – don’t let that stop you wearing sturdy footwear – heading north towards Signal Peak.  It passes through an area rehabilitated after the devastating floods of 2011 that cut the road between Dunkeld and Halls Gap for several months.

Thank goddess for the 780m Signal Peak dominating the skyline as the track takes a sharp turn to the south-west.  That’s where the real climbing (see? You SO need those boots!) begins up the escarpment. The peak means endless photo opportunities which in turn means – of course – as many rest breaks as you want need!

Luckily, I was well into a significant rest break at about the two-thirds point when two pensioners (pensioner = anyone older than ME) trotted up the track towards me.  They showed none of the signs of fatigue like the shortness of breath, red face and sweaty glow that plagued my progress. If they’d seen me a few minutes earlier, they’d have been forgiven for assuming I was about to collapse.

Attempting a hike of this lengh (6.5 km) and degree of difficulty (HARD!) without water and food would have been madness!

We exchanged a few words – yes, unlike me they could still speak despite the steep gradient (Grade = Hard).  Then they moved on up the rocky trail leaving us to follow more sedately in their wake.

It’s a complete coincidence that as the trail to the summit gets steeper and more rocky, the scenery gets even more stupendous (read: requiring more ‘photo’ breaks). Panoramic views across the Serra Range, the Victoria Range and Valley, the southern plains and Dunkeld itself make the Mount Abrupt hike one of the most scenic in the Grampians.

The magnificent 360° view even gives the Pinnacle and Boroka Lookout back in the more popular tourist area around Halls Gap a run for their money!

And that clear view as we entered the last – and most rocky stretch – of the hike, included the pensioners taking their last few steps to the Mount Abrupt summit!

By the time we arrived at the peak, however, they were ready to leave, so the staggering 360° scenic sensation was all ours.  We stayed up there for a while.  We needed to a) recover; b) record photographic proof of our achievement; c) eat our lunch; and d) prepare for the rigors of the descent ie continual wildlife, wildflower and scenery shots! I’ll leave you to imagine how long that took!!

After that, we completed the hike by retracing our steps 3.25 km back down the steep, rocky track to the trail-head and carpark.  For us, about 5 hours after we set off!

But if you thought descending was the easy part of your quest to climb Mount Abrupt, you’d be wrong! 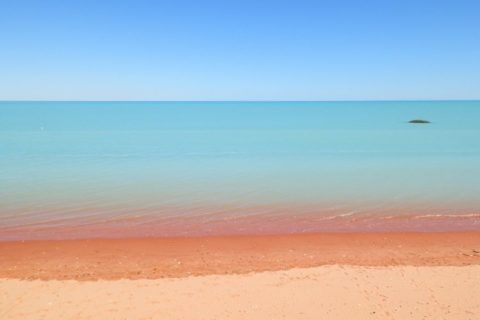