‘What goes up must come down,’ she twanged, immediately identifying a) her astonishing originality and b) her country of origin.

Suitably dressed for a dusty, rocky climb through clinging vines, a charred mountainside and tropical humidity in a white ‘resort’ dress and gold sandals, this gem fell from her pinkly glossed lips and dropped like pearls of wisdom before swine. The artfully abstracted way her be-ringed hand floated through the air, its great stone winking and flashing in the hot midday sun, immediately telegraphed a recent wedding.

How much longer they’d be together was less evident. His well worn hiker kit – ‘real’ hiking boots with thick socks, water backpack, old T-shirt, hat and pink zinc clearly spelled out more than one significant difference between them.

Several thousand kilometres into a winter road trip – and bailed up in Townsville with car trouble – we’d escaped to nearby Magnetic Island for a day of tropical R&R. But that’s the benefit of an Australian road trip – heading off the tourist trail for new experiences is so often the most rewarding part of the journey! As it proved for us on this fabulously perfect July day – winter, Tropical North Queensland style!!

On the steepest part of the Nelly Bay to Arcadia Walk track, Pilchard and I were now feeling the effects of setting out on a 6 km hike without food or water, our towel-laden backpacks weighing us down in the tropical humidity. It was all just a simple misunderstanding! Arriving on Magnetic Island, 8 km and 20 minutes by ferry from Townsville, we planned an action-packed schedule over morning tea at the terrific Nelly Bay bakery. As you do.

The first leg of the Nelly Bay to Arcadia walk reached a lookout from which great views were promised. A 45 minute return trip, according to the brochure – and we’d see a new (to us) part of the island before returning for lunch then still have ample time for several other Magnetic Island activities before the evening ferry.

BUT … wandering along the road from the bakery to the trail head, then winding up more steeply through the rainforest to the vantage point took longer than anticipated. Every few steps was a new bird, flower or vista to admire and/or photograph. By the time we reached the overgrown lookout, we’d already been going the best part of an hour, so it was a cinch to continue up the track in quest of a better view.

We could always turn back, couldn’t we??

Winding ever upwards, the track grade quickly moved from ‘easy’ to – well, that depends on your point of view! And whether or not you’re a masochistic young fit person. Cue the flash of gold sandals as the honeymooners gained on us – nothing for it but to stop and admire the view move over and let them pass. Pausing only to ask how far to the nearest latte the bride trilled her words of ‘wisdom’ before disappearing behind her hiker husband with a swirl of white skirts.

Well, they WERE 20 years younger than us. At least. Probably.

But the honeymoon couple’s passing heralded a wildlife bonanza as a passing flock of Red-tailed Black Cockatoo (above) distracted me from uncharitable thoughts on maintaining white frock cleanliness. And as I neatly captured them – the ‘black dots’ cleverly shown in this rare ‘wildlife action’ shot – we reached the point of no return. The food and drink of Arcadia beckoned and we reluctantly abandoned fantasies of lunching at the Nelly Bay bakery.

A little further and the panorama over Magnetic Island’s magnificent Horseshoe Bay (first picture above) stretched out in front of us through the heat haze.

The track headed downhill from here, but several kilometres of walking remained and I started to fantasize about bottles of cold water. Actually, make that flagons. And plunging into the sea to sluice off the dirt and sweat after flinging off my non-white (but still grubby) clothing …

That’s the only explanation I have for missing the droppings on the ground. Because if, like Pilchard, I’d seen them, I would have looked above to identify who or what was responsible. Naturally. BUT happily, wanting to gloat over share his find with me, Pilchard pointed out the culprit.

Much easier to capture that elusive ‘wildlife action’ shot on this little critter.  I take no responsibility for the angle of this photo – take comfort that not many have looked up a wild koala’s bum at THIS close range!!

Apart from a further wildlife sighting – this time ‘overseas-tourist-hunting-for-the-hiking-track’ – the southern descent into the suburbs of Arcadia was uneventful. Except to say if this is suburbia, bring it on!!

Oh! And also the staggering views across the strait to the mainland – and Townsville!

I didn’t notice my audience until I’d come up for air – after lining up two drinks and inhaling one of the best fishburgers I’ve had the pleasure of from Arcadia’s Butler’s Pantry.

Once common as pets, Bush Stone-curlew is better known to Pilchard and I as ‘Shrieking (insert expletive here)’ for the astonishing cry it lets loose at unexpected moments. Usually in the middle of the night in what has become its 21st century natural habitat, the caravan park. Right under our bed end. But I digress … this one was just foraging for snacks. Tough luck, matey. Nothing heading your way today!

And that swim was on the cards after all with a bus ride down to Horseshoe Bay – the perfect finale to our Nelly Bay to Arcadia walk!

I got to do this while on an Aussie Road Trip.  But if you’re pressed for time, why not visit Townsville and Magnetic Island the FAST way with the best flights you can get?

Go on! You KNOW you want to! 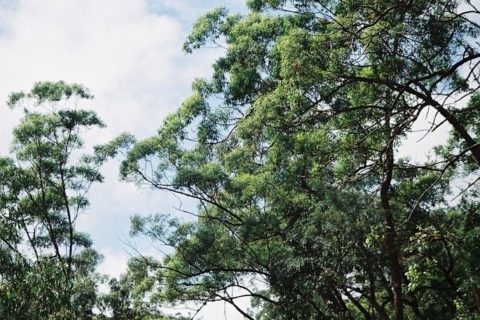