But Central OZ isn’t just about Uluru and Kata Tjuta. Of COURSE they’re several kinds of awesome, but there are lots of other attractions that’ll show you just as good (and far less crowded) a time! And – even better – they’ve all got that trademark Central Australian RED!

So you’ve hired the car, seen Uluru and you’ve got another few days to kill. Or if you’re REALLY lucky, you’re an Aussie with a camper trailer and a bit of time on your hands.

So what do you do?  Hit the road – and see my TOP 7 Central OZ Red HOT Spots!  Just click the headings for more info!!

Just down the road and round the corner from Uluru, Watarrka, as it is known to the local indigenous people is SO worth the 166 km one way detour off the Lasseter Highway back towards Alice Springs. For many Aussies, visiting Kings Canyon is a tribute pilgrimage to a famous scene from classic OZ movie ‘Priscilla, Queen of the Desert’. Haven’t seen it? Click HERE for a trailer!

But you don’t have to hike the Canyon in a frock to show yourself a good time. The 6 km (4 mile) Canyon Rim circuit requires a reasonable level of fitness, but as you cross the rugged rocks you’ll get to see stunning vistas across the plain, the Lost City and Garden of Eden and sensational sunsets that make those towering rocky RED cliffs GLOW.

Stay at the Kings Canyon Wilderness Resort campground (closest to the Canyon) or at nearby Kings Creek station so you don’t have to rush. The men in frocks have long gone, but the awesome RED Canyon will be here for a LONG while yet!

So you’re back on the Stuart Highway heading north to Alice Springs. An hour or so before you get there, you’ll pass the Stuarts Well Roadhouse. Unless you’re a SMART traveller, in which case you’ll stop. Because Stuarts Well has one of the most bizarre and uniquely Australian Outback travel experiences you’re likely to see.

Unless you’ve already spotted a singing, piano playing Dingo named Dinky someplace else, that is.

For many years, roadhouse owner Jim ran tours to Kings Canyon from a resort he and his family built from scratch on nearby leasehold land. Until one year, the landowner resisted all attempts to re-negotiate their lease. Strangely unwilling to ‘gift’ the resort they’d paid for and built by themselves on their leasehold to someone who hadn’t done anything towards it but collect the rent, Jim and his family destroyed it.

Now Jim’s based at Stuarts Well. As well as running tours to nearby Rainbow Valley, Jim now assists visitors achieve their (perhaps as yet unrealised) dream of seeing a singing, piano playing real live dingo in the flesh! For perhaps the first and last times in their lives …

There’s even accommodation and campsites at the roadhouse for those who want a dinner and show experience with a difference!

STOP PRESS!  In what must be a dark day for Central Australian Tourism, Dinky the Singing, Piano Playing Dingo has retired.  Of course, the legend lives on in the hearts and minds of those who have seen him … AND countless YouTube clips!  See Dinky in full voice HERE!

Just as well there’s a special bonus EXTRA attraction below to make up the numbers, huh?!

Staying at Stuarts Well puts you in the hot seat for a 22 km one way dirt road detour off the Stuart Highway to the amazing Rainbow Valley.

With a rainbow of multicoloured rocks rising above the (frequently dry) salt lake in front of it, the rocks are easily accessed from a short track from the visitors car park.

Exploring and/or photographing the rocks is an excellent way to pass a few hours. Or a day. Or more …

Stay at the Rainbow Valley Campground (is it a coincidence that my best photo of the Valley contains one of the best Scenic Public Toilets in the country?) to be right in the (RED) hot seat for some extraordinary outback sunsets.And if it rains?Well … the road might be impassable, but at least you’ll get to-die-for pics of the amazing Rainbow Valley formations reflected in the lake!

And I’ll be as jealous as hell!

Many years ago when I first toured the West MacDonnell Ranges, I didn’t call in to the Ochre Pits ~115 km from Alice Springs along Namatjira Drive. I won’t be making that mistake again! The intriguing contours of (not just RED) colour in the creek bed and surrounding rocks, and its status as a place of significance to local Indigenous people from the area show a different – and fascinating – side to Central Australia.

Just up the road from the Ochre Pits, if you can’t find LOTS of cool things to do at Ormiston Gorge, you clearly haven’t read my 7 TOP Ormiston Gorge attractions guide (see link in title)!

Yes, it’s going to take more than one day to explore this end of the West MacDonnell Ranges and Ormiston Gorge is the best spot from which to do it!

Staying at the nearby Glen Helen Resort with its own spectacular gorge, or the Ormiston Gorge campground means you don’t have to rush back to Alice Springs before you’ve seen – and done – everything.

But be warned. Don’t bother with this option unless you’re up for magnificent sunrises and sunsets; the Ormiston Gorge and Pound walk – one of the best short(ish) hikes in OZ; the stupendous splendour of nearby Mt Sonder; the beauty of Glen Helen Gorge and the glorious, glowing RED – everywhere!

This is as close as I got to Gosse Bluff. 175 km west of Alice Springs, the long line of gorges, waterholes and mountain ranges that forms the West MacDonnell Ranges comes to an end at Tylers Pass – from here the road snakes down onto the plain.

We’d spent the day exploring the area around Ormiston Gorge and driving as far as the Tylers Pass lookout had been an afterthought to end the day before heading back to the campground.

About 21 km from the lookout, the vast bulk of Tnorala – the remains of a comet crater, 5 km (~3 miles) across – is an impressive sight.

With no camping allowed at the Bluff, the only option was a flying visit. But even if we’d wanted to attempt a kamikaze night drive cutting a swathe through the nocturnal desert creatures feeding at the road’s edge, visitors to Tnorala need a Mereenie Tour Pass. And the nearest place to get one was back at Glen Helen Station.

But it’s SO on the list for next time!

Yes, I know. EVERYONE’S been to Simpsons Gap, that narrow passage (there’s only so many ways to say ‘Gap’) through the MacDonnell ranges.

Only 18 km west of Alice Springs (or 17 km along the bike track) it’s the ‘Claytons’ Central Australia tripette de rigueur from the Alice if you haven’t got much time.

And there’s nothing wrong with that!

BUT the rewards are even greater for those who spend a bit more time and take the 1 hour return Cassia Hill walk up onto the schist escarpment (once part of the floor of a massive inland sea) and look down on the Gap.

Wildflowers, classic Central Australian scenery – and a staggering 360ºview, of which Simpsons Gap is a very small part.

Did I say SEVEN cool things? Of course there are WAAAAAAY more than that – so here’s another one for nothing!

Even though it’s 412 km and ~4 hours north of Alice Springs, the great sprawl of spherical sandstone rocks weathered by the wind and sand all aglow in the Outback light are worth the trek.

Especially if you’re there at sunset. Or sunrise! Which generally means staying at the Devils Marbles campground, or at either of the nearby settlements of Wauchope or Wycliffe Well.

Aboriginal Dreamtime legend and scientific explanation both offer theories about the spheres’ formation. But in this region with its strong colours, harsh climate and stark beauty, the Indigenous theory seems more appropriate. It’s easy to see why this is a sacred site and also a ceremonial and trade meeting place for four different Aboriginal language groups.

Besides, just 20 minutes further south and also renowned as the alien capital of Australia is Wycliffe Well! But that’s another story …

Central Australia has enough other attractions in both colours – RED and not-RED – to keep you busy for weeks. 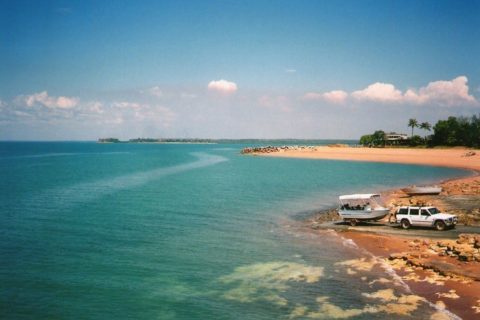 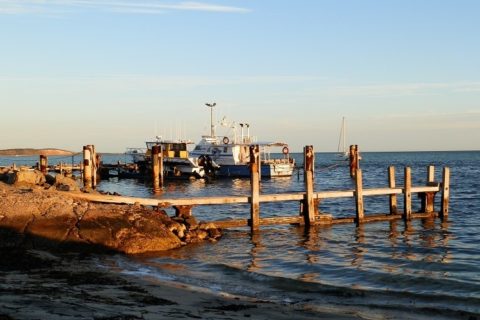