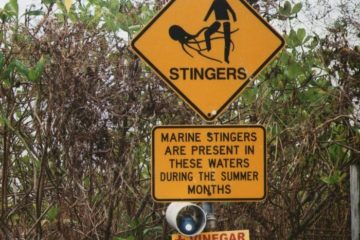 Don’t panic!  As far as I’m aware, there are NO giant squid plaguing Australia’s northern beaches – despite the graphic on this sign!! But no giant squid doesn’t mean there’s no danger.  What IS prevalent during October – May in Australia’s Far North is the Irukandji (carukia barnesi), one of the most virulent jellyfish in the world. Its sting (ie marine ‘Stinger’) brings[…]