Some do it for the record.
Some do it for the challenge.
Some do it just because it’s there.
But I climbed Australia’s highest mountain for the chance go as HIGH as I could go – at the highest Scenic Public Toilet in the country!!
A mere 100 metres or so below the Mt Kosciuszko summit, the Rawsons Pass Public Amenities block was doing a roaring trade during our mid-March 2013 assault on the peak. Back in the good old days, when being a mountaineer was as easy as taking a short trip in the car, ‘climbers’ attempting the summit had to take their chances with the dunny of the great outdoors.
But … without the luxury of lurking behind a convenient shrub for privacy – at 2228 metres (7310 ft) above sea level, this Snowy Mountains alpine dome is well above the tree line!
We’d toiled along an undulating 6 km (~3.5 miles) track, gamely fighting off the persistent altitude sickness (or was it lack of fitness?) we’d suffered since alighting from the Kosciuszko Express chairlift, a speedy 600 metre rise in altitude from way below in ski village Thredbo. And now we’d reached Rawsons Pass where the old access road from Charlotte Pass, highest village and site of the coldest temperature ever recorded in Australia, formed the final relentless uphill slog to the top.
Despite regular threats by cash-strapped governments of causing irreparable damage to the delicate alpine environment by re-opening the Kosciuszko National Park to pastoral leases, apparently the threat posed by the waste from ~100,000 mountain climbers who visit each year has been enough to warrant the purpose built trail ending at the pass.
And the highest public amenities block in the land!
And there, outside the Rawsons Pass Loo inset into the side of the mountain like a bunker, was a car. A CAR!!!!
I guess the toilet cleaner’s job description didn’t involve mountaineering? At least the bunker would double as a shelter in an unexpected snowstorm emergency!!
Suppressing a pang of longing for more civilised times when driving was a necessary skill for a high altitude ascent, and school students were more likely to be in a classroom than crowding out the conveniences, we bypassed the bunker and headed for the top.
Maybe if we hadn’t picked the perfect weather day, we wouldn’t have had to dodge the loo queue! But tempting though it would be to take a twinkle from the top in honour of the amazing 360° view from the highest place in OZ, the plethora of people at the peak made a fine deterrent. For us, anyway!
And back at the bunker after the pleasure of doing business as HIGH as possible in an OZ public amenities block, we looked out from Australia’s HIGHest (and arguably MOST scenic) loo to OZ’s HIGHest peak not so far above. And tried not to think of the 6.5 km walk back to the Kosciuszko Express station!
Now … where’s a brandy-bearing St Bernard when you need one?
Want MORE?
Like it? SHARE it! 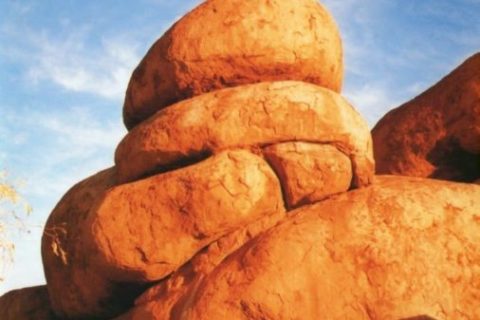 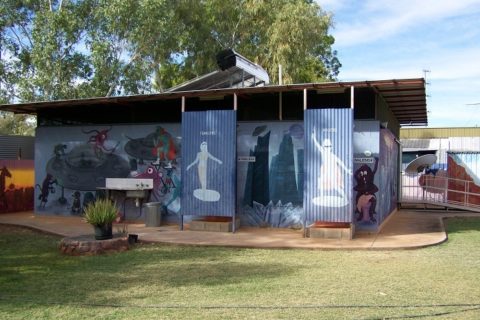