My hard-won title of ‘World’s Greatest Coward’ was in no danger of disappearing as I stood poised on the first of the 140 hand-hewn rocky steps descending into the depths of the chasm.

Above the Grotto:  A loo and no view!

The Grotto’s inauspicious car park and ‘rest area’ had promised worse than nothing.

A desolate expanse of bare, rocky ground; bins overflowing with tourist season detritus (read wine casks, beer bottles, loo paper); and a public toilet so disgracefully messed up that even my expertise couldn’t turn into something scenic.

Hordes of Grey Nomads swarmed across the rocks towards the tree-lined gash at the head of the gorge. Water gleamed far below through a mat of vegetation. People posed. Cameras clicked. People departed. Motors leapt into life.

The Staircase from Hell

Further back towards the car park, a few steps led directly off the cliff edge into what looked like mid-air. Right next to the sign warning ‘Cliff Risk Area’ and a splendidly graphic depiction of a person tripping over a tsunami.

This couldn’t possibly be the ‘staircase’ to the Grotto. Could it?

No one else had gone down the steps to nowhere, and no wonder. If this was the ‘easy’ stairway I’d anticipated when we left Wyndham for the famous Grotto, I wouldn’t be going anywhere either!

And ultimately, what’s the point of having life-changing adventures if they don’t actually change your life???

If I’d have been so inclined, I’d have crossed myself, but instead settled for divulging the secret location of my blog password in the event of my untimely death by misadventure.

At least death at the Grotto sounded mildly exotic – and with that morbid but strangely comforting thought, I faced the staircase from hell.

The Reward of the Brave

Fit, agile and possibly younger readers will doubtless marvel at my inability to trip down the rugged stairway as lightly as an election promise. But as I negotiated the switchbacks (sadly unrelieved by guardrails) with stairs cut directly from the cubic rock of the cliff walls and pointlessly clutching at sheer rock faces for support I descended through a portal into paradise.

Dark, and shimmering with fractured reflections from the towering cliffs above, the pool at the base of what must be a magnificent wet season waterfall, is estimated to be at least 300 ft deep.

Twisted tree roots keep the cubic rock crystals in place (please god) and water trickles over carpets of moss, full as a sponge. And the person or persons unknown who hung the rope swing from an overhanging tree high above the pool?

I gasped as I dipped my feet into the water, shaded for most of the day between the steep rocky walls of the chasm that surrounds it. I could only imagine what would have happened if my less calloused body parts had been immersed! But its frigidity didn’t deter the water monitors (lizards) swimming and sunbaking on the rocks, and on a hotter day would be heaven!

The Magic of the Grotto

Was I still in Australia? Or had I inadvertently slipped into Middle Earth?

The Grotto’s quietude, dream-like tranquility and the flicker of its ever-changing reflections must have had a mesmerising effect that blocked out all traces of the world above and stilled the passage of time. (That’s a poetic way of saying I can’t recall how long we spent down there)(or how many photos I took).

As we explored its nooks and crannies, careful not to disturb the lizards, was it a coincidence that I discovered my camera’s ‘Magic’ setting?

Of course that meant re-taking nearly every photo to see how ‘magic’ affected it!!

But finally, it was time to leave.

And as we reluctantly ascended back into the real world’s sunlight, dust and devastated car park the Grotto felt like a dream from which I wished I could not awake.

While I deplore the Aussie tendency for unimaginative place names, ‘Grotto’ is a geographically accurate description.

But it hardly captures the strange and unexpected beauty of this remote jewel of the Kimberley region, does it?

So what would I call it?

Nah, I’m no good at this. What would YOU call it?! 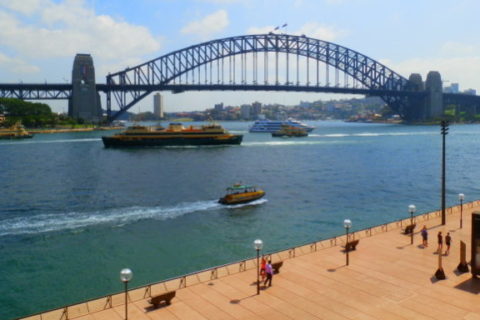