The insatiable curiosity that leads me off the main road to explore an interesting sounding place or rumoured oddity isn’t always rewarded.

But in the tiny town of Patchewollock, deep in the Victorian Mallee and just off the Hopetoun/Walpeup road, I hit paydirt.

Unmarked on any tourist literature (that I’d seen) Patchewollock hosts one of the most bizarre Australian Big Thing I’ve ever seen.

The Big Malleefowl, constructed almost entirely from painted corrugated iron, is perched near the restored railway station and goods shed, classified by the National Trust. Thanks to the decades of relentless country Australia de-railing by successive governments, the trains no longer run.

And neither does the Big Malleefowl. A little unsteady on its feet, the orange netting around its claws stops people adults children from attempting to climb it.

The heartland of the vulnerable Malleefowl (Leipoa ocellata) is unsurprisingly the Mallee country and nearby Wyperfeld National Park is a known habitat. This notoriously shy bird incubates its eggs on the ground in a large mound of earth and leaves, so is therefore under threat from both bushfires and foxes, despite it’s protective colouration that acts as camouflage.

Or perhaps the Big Malleefowl was designed to echo its megafauna ancestor, Progura naracoortensis …

Whether its unknown maker/s intended it to be male or female is uncertain. And with no distinguishing characteristics between them, I’ll wait for an expert chicken sexer to make a determination!

But whatever its gender, I suspect Outback Patchewollock has scored itself an exclusive. While Malleefowl are found in other areas of Australia, I’d be amazed to find that anyone else had the foresight and vision to actually make a Big One!

And because it’s an Australian endemic, I’m betting you won’t see a Big Malleefowl anywhere else in the world!

Now THAT’S worth visiting Patchewollock for!! 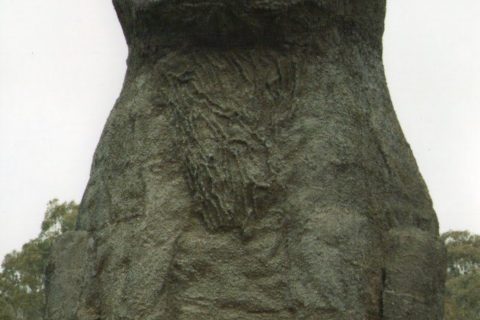