Sometimes, not planning turns out best. And sometimes the planets align and fabulous weather, bizarre experiences, brilliant destination and perfect moments all come together on one fine day …

Fine in every sense!

And the sky!  The glorious sky!!  Yes, Innes National Park at the very southern end of South Australia’s York Peninsula was already one of my favourite places.

But, on this fine day in December 2011, the air shimmering with the promise of summer, the breeze cool over the water, crazy patterned cloud painting the sky and new* Scenic Public Toilets on the verge of discovery, I wouldn’t have traded places with anyone! For ANYTHING!

The young surfies doing god knows what in the shelter shed overlooking Pondalowie made the West Cape Lighthouse circuit track the most attractive option. Whatever they were doing required the doof-doof-doof of music pounding from the open door of their car – parked as close as could be without actually hitting the barrier. Ah, sweet mystery of life …

But once heading for the lighthouse, the staggering view wiped all thoughts of sand, surf and various other ‘s’ words from our minds. Rock parrots grazed among the low vegetation, but Pilchard’s attempt at the perfect photo was thwarted by Captain Kangaroo!

Pondalowie Bay’s magnificent islands stretched out in front of us as we rounded the lighthouse and Helipad and the cliffs dropped away to the blue, blue sea meeting the sky in a dark band on the horizon. Who knew whether that meant bad weather coming? And who cared??!!

Down in the bay, the lighthouse we’d just visited was a small and distant speck on the headland. And who’d stay in the uninviting car park, ablaze with heat and bright light reflecting the road’s stark white gypsum?

Not us … but no one in the car closest to the track – towels over the windows shielding our view from god knows what inside – was admiring the view!

Alone at last, we reached the end of the line, and the perfect curve of Brown’s Beach far below the car park. A sign warned of the eroded track – another example of South Australia’s cunning plan to replace maintenance and repair with warning signs and reduced speed limits …

A car, unaccountably boxing us in, arrived as we set off down the steep track to the beach. Jesus may well be Lord (according to their windscreen sticker) but he didn’t stop them having a good old sticky-beak through the car windows when they thought we were otherwise occupied on the descent!

However, with all our valuables in my backpack, and our ageing car closing in on 250,000 km, the lord was not providing for his middle-aged believers today!

But I didn’t care! With water so clear I could photograph the starfish and sea urchins through it, the cool sea lapping at my feet, the sand now thankfully too hot for the snakes that’d left their tracks behind and the glorious beach stretching out in front of me, our one fine day drew to a close.

A day like this deserves to be recorded. Because who knows when – if – the planets will again align to give us another? 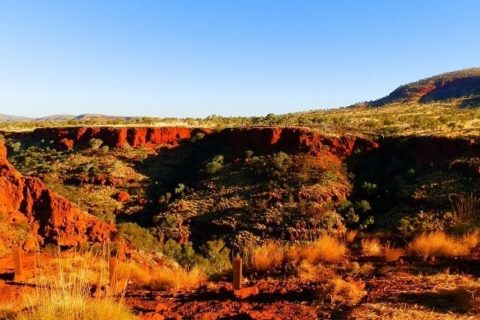