It’s just a 20 minute drive from the Wycliffe Well roadhouse to the stunning natural attraction of Karlu Karlu/Devils Marbles.  But other than distance, these two places could not be further apart.

Wycliffe Well, known as Australia’s UFO capital, is full bizarre extraterrestrial figurines, spaceships, mural-covered buildings and other oddities dotted throughout the campground.  On the other hand, the Devil’s Marbles, or Karlu Karlu as it is known to the local Indigenous people, is a magnificent and totally natural tumble of massive granite boulders.  Rounded by wind and weathering into ‘marbles’, the rocks are a standout feature rising above the surrounding plains.

Travelling the short distance from Wycliffe Well to Karlu Karlu is like going from the ridiculous to the sublime.

The weird and wonderful world of Wycliffe Well is about four hours drive north of Alice Springs on the Stuart Highway.  After checking in to the bizarrely decorated campground, parking in the ‘Elvis’ campsite, then exploring the other oddities, we drove north to see the Devils Marbles by sunset.

With two such  extremes, we thought a day like this would be pretty hard to top! But after a meal at Wycliffe Well’s Galaxy auditorium followed by the strangely appropriate first episode of a new Dr Who series, we found that it could … but I digress.

During the Australian winter months (June – August) it’s standing room only at the Devils Marbles at sunset.  If you can fight your way through the other sunset photographers (that’s what ‘elbows’ are for, right?), Karlu Karlu gives amateur photographers (like me!) an unparalleled chance to take shots that look good.

It’s one of those sadly all too rare places where it’s almost impossible to take a bad photo.

Karlu Karlu, meaning ’round boulders’, is sacred to the local Indigenous people, who believe the rocks are the fossilised eggs of the Rainbow Serpent.  After creating the earth, the serpent returned to this place where the rainbow meets the earth, leaving the eggs behind.  Stand among the imposing granite boulders when they are lit up by the sun at sunrise or sunset and it’s easy to feel a connection to the Aboriginal Dreaming lore.

The scientific explanation is that Karlu Karlu/Devils Marbles were originally rectangular blocks caused by molten rock as it cooled under a layer of sandstone. As the sandstone eroded, water, wind and sand weathered away the edges and corners of the rocks into spheres.  This is because a sphere is the shape with the smallest possible surface area.

And here we see in action the great divide between science and art – this explanation seems just a little too prosaic for a place so magical, doesn’t it??

Karlu Karlu/Devils Marbles was returned to the traditional owners in October 2008, and interpretive boards tell the Dreamtime story. The conservation reserve is open to day visitors, and easily accessible from a carpark just off the Stuart Highway.  The  campground (with its excellent Aussie Scenic public toilets) makes it easy to take both sunset and sunrise shots, as well as explore the many rock stacks in the reserve. 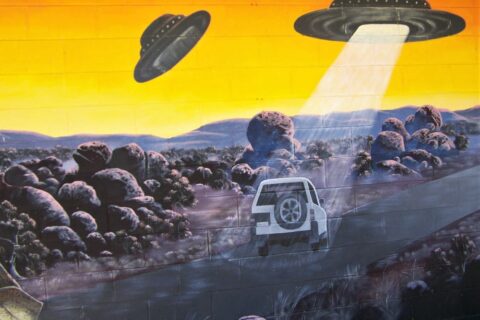