During my travels I’ve observed – and been on the receiving end of – some odd behaviours.  Of course during this time I’ve more than likely caused many a ‘what the …’ moment myself …  The shame files aren’t about ALL travellers – they’re about the ones who indulge in behaviours that annoy, aggravate and irritate fellow travellers most of whom would agree that these be stopped or banned!!

I’m not sure whether true or not, but in Australia, dingo mythology says a dingo will chew off a limb rather than remain caught in a trap.  The term ‘dingo trap’ has therefore become synonymous with going to great lengths to escape from an unpleasant or distasteful situation.  And what better situation than the sense of entrapment when faced with a fellow traveller who just doesn’t know when to shut up?

With the possible exception of a clutch of young adults arriving back at their crowded tent in the site next to you after a night out drinking, the dingo trap is highly likely to be a Southern Grey Nomad (aka GN)!

Over the years, I’ve heard all about children, grandchildren, and other random relatives I don’t know.  Numerous rig modification technicalities have been explained to me, along with the pros and cons of technological advances in the caravanning world.  Then there’s travelogue wars where travel destinations are a badge of honour, sometimes accompanied by outright hostilities about the ‘best’ spots to visit.  I’ve learned that I haven’t yet lived because I’ve not visited a particular GN favourite spot, or even worse – visited AND hated it!  And while I realise that sharing a resume of health problems isn’t exclusive to GNs, it can be harder to take when juxtaposed with the fabulous locations in which I’m hearing them.

But individually, none of these really qualify as dingo traps.

Why?  Several crucial elements characterise a true dingo trap, all of which must be present!  These include:

The effect is magnified significantly where the GN has an accomplice.

And if there’s any doubt, ask yourself the ultimate test question – would I rather chew my arm off to escape?  Or continue to listen?

I KNEW I was in the middle of a dingo trap when we were working through our packing up routine prior to an early departure and a woman from the neighbouring caravan (lets call her Brenda) wandered over in her dressing gown, coffee in hand and small dog in tow.  The dog immediately started doing what dogs do around our tyres.  Before I could respond (ie kick it out of the way), Brenda spoke without preamble.

‘We used to have a camper exactly like that,’ she stated as puddles started appearing around the tyres.  I wasn’t quite sure how to respond, so made a non-committal noise and kept on with the routine.  ‘We hated it,’ she continued.

‘Well, we’re very happy with ours,’ I replied, wondering where this was all heading.

‘No,’ she continued as if I hadn’t spoken, ‘you don’t want a camper like this.  What you want is to trade it in for one like ours,’ she stated, indicating their standard caravan.

I moved to the other side of the trailer for my next task, reiterating that our trailer suited us so well, we’d actually lived in it for 18 months.  Undeterred, she followed me round, calling to her husband.

‘Bob, come over here and tell these people why we upgraded from what they’ve got to a caravan,’ she cried as I surreptitiously tried to nudge the dog away from the tyres.  Bob obediently trotted over, and joined her in invading my personal space.

I told Bob we were very happy with our trailer.

Bob proceeded to list the reasons they’d upgraded – this included everything that had EVER gone wrong with their trailer.

I reiterated that our trailer hadn’t had any of those problems, and suited us very well.

Brenda then repeated everything Bob had just said, adding ‘there’s much more space for the dogs.’

I advised Bob and Brenda we didn’t have, and never would have, pets on the road as they made such a mess.  I also advised we were in a bit of a hurry and had hoped to get away by 8:30 (5 minutes ago).

Bob and Brenda simultaneously started listing the benefits of having their pets with them on the road, and how their lives had been transformed by all being together in their caravan.

I don’t know for how much longer this would have gone on had my mate not asked loudly and irritably when I was going to finish.  This didn’t deter Bob and Brenda one bit, but I ignored their diatribes, finished the routine and got in the car.  We drove off while they were still talking.

My mate said that was the only way he could think of to get away from them.  He was right!

Can you match the dingo trap elements with the relevant parts of the example above?  I bet you can!!  Furthermore, I bet you can think of an example (or two) of your own … 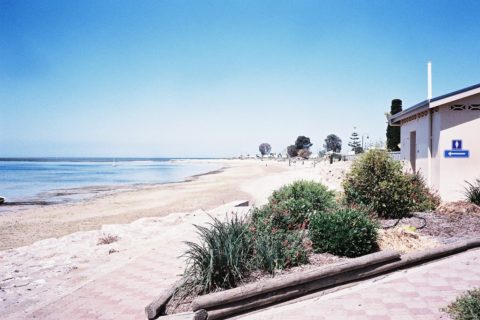